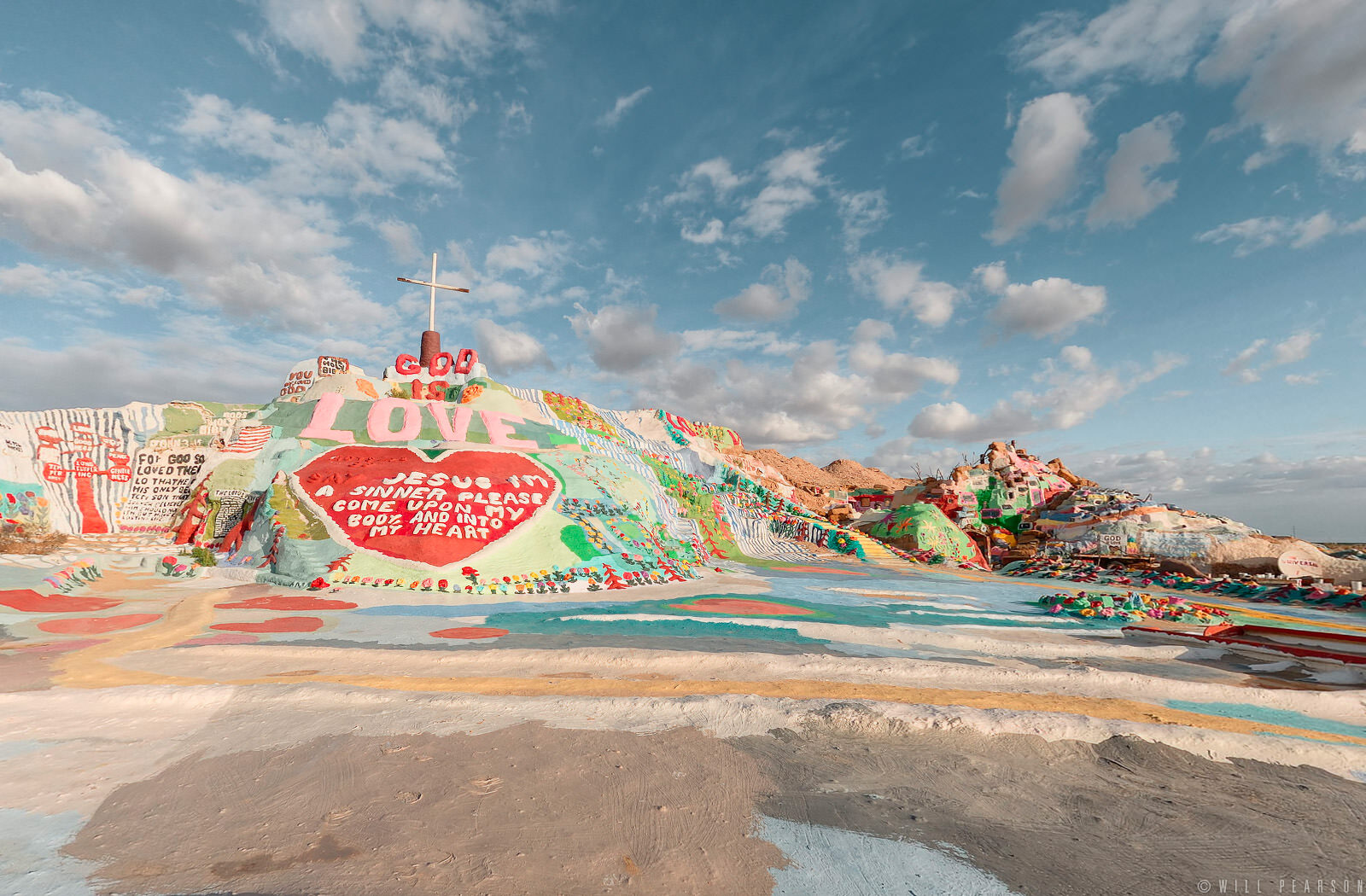 Leonard Knight started to build ‘Salvation Mountain’ in 1984. Constructed entirely from adobe, paint and window putty with oddments of found objects, it rises out of the barren desert landscape as an incredible example of Folk Art. Sleeping in a truck on site, Leonard is constantly adding to the mountain to help spread the message he believes in; ‘God loves everyone’.

I travelled to Salvation Mountain. Having got lost on the way, I stopped in a back street in Niland and asked a young woman the way. She gave me perfect directions and said ‘Say “Hi” to Leonard for me.’ Everybody knows Leonard Knight.

He’s been out in the desert here for nearly 25 years, building his mountain as a tribute to god and Jesus. He’s had disasters where the mountain collapsed and he had to start it again from scratch, and once had to battle environmentalists who wanted Salvation Mountain removed due to the ‘toxicity’. Now the Folk Art Society of America has granted the mountain a plaque, designating it as a work ‘worthy of protection’.

Salvation Mountain is constructed entirely from adobe, paint and window putty with oddments of found objects, it rises out of the barren desert landscape as an incredible example of Folk Art. Sleeping in a donated truck on site (also covered in paint and putty), Leonard is constantly adding to the mountain and the museum next to it to help spread the message he believes in; ‘God loves everyone’.

As we wander around, Leonard comes over to chat, enthusiastically explaining what parts of the mountain are ‘That’s a car door that I found out in the desert…. that tree’s all made out of tractor tires… The flowers are made from window putty….’ He also explains why he thinks his message is important, explaining that your faith doesn’t matter, he just wants everyone to know that Jesus loves them. Whether you believe the message is almost immaterial – the mountain stands as a testimony to one man’s faith and determination, and that alone is pretty incredible.

In this series of virtual tours, you can explore the whole of Salvation Mountain. From the ‘peak’, you can look out over Slab City (a RV community which sprang up on the abandoned concrete slabs of a WWII army base) and see the Salton Sea in the distance.

[Sadly Leonard passed away on 10th February 2014. He was an inspiration to many and it’s hoped that Salvation Mountain, his labour of love for almost 30 years, can be preserved for many more to come.]